“I have to remind myself that some birds aren’t meant to be caged. Their feathers are just too bright. And when they fly away, the part of you that knows it was a sin to lock them up DOES rejoice. Still, the place you live in is that much more drab and empty that they’re gone. I guess I just miss my friend.” – Morgan Freeman, The Shawshank Redemption 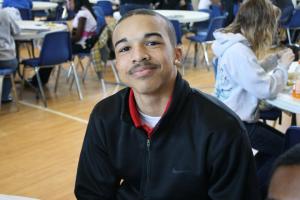 He was my friend.

I say that with caution, but not hesitation.  It’s taken me a year to realize that he was more than my student, but he was my friend.

You see, we expect to lose the students who cause trouble, create mischief, diddle and dabble in things they know should be off limits.  But when you lose the kid who embodies all of the superlatives, Mr. “Most Likely to Succeed” who was also Mr. “Athletic”, while simultaneously able to be the “Best All-Around”, it rocks you to the core.  If you could measure his life trajectory, you’d find it to be off the charts.

And perhaps it is fitting that with a life trajectory that’s off the charts, that we now find him in heaven instead of with us.  I guess the world wasn’t big enough; that God was taking him far higher than we could ever imagine.

But I miss my friend.

I miss seeing him at Little Caesar’s, eagerly serving pizzas as if he were working in the most prestigious place; like the kitchen in the White House.  I miss seeing his little green Toyota speed out of the parking lot after school, humming the beats to some of the most ridiculous rap songs ever heard. I miss seeing his lanky swagger in the halls, floating a full head above most of his classmates and teachers; yet still a kid at heart as he packed his Transformers backpack full of AP Chemistry materials. I miss this kid, who responded to my correction with “Yes, M’aam.  I will do better.  But tell me, ‘How are YOU doing?'”

I miss my friend.

One year later, I still miss my friend.

As I watch your classmates delight in the countdown of days until they walk across that stage headed to the colleges of their choice, I miss you.  As we fill up the wall of acceptance with letters of college acceptance, I find myself wondering which letters I would have put up that would have had your name on them.  As I watched your teammates on the basketball court in the gym that is now named in your honor, I couldn’t help but wonder what it would have been like to see you on the court.

But all that wondering comes down to one thing: I miss my friend.

4 thoughts on “One Year Later.”